SweetEscape is committed to helping you capture life perfectly during the good times and tough times. As one of the biggest platform that connects you with thousands of photographers around the world, we would like to connect you with one of our photographers every two weeks on Instagram Live to discuss and share their experience during this global pandemic and their memorable moments as a SweetEscape photographer. In the third episode of our Instagram Live with #SweetEscapePhotographers, we talked to Mizuki Itakura from Tokyo, Japan. Mizuki is one of our longest-serving photographers, and he shared a lot of interesting things from Japan, including the now-missed opportunity to do Hanami this year.

How’s the situation there?

Japan was one of the first countries to have a positive case. The first couple of months weren’t that huge, but then suddenly it exploded by the end of March. Technically what we have here is not a lockdown; the government only says that you should stay at home and don’t go out, supposedly from April 7th to May 6th. But everyone here is so used to wearing masks in public even before the whole COVID situation, so that's one positive thing. So far, the number of the people infected by the virus has been decreasing as well so I think things are going to get better soon. Most big shopping malls and arcades are closed, but supermarkets and convenience stores are still open. Restaurants, bars, and live musics are mostly closed. They only accept takeaways and deliveries.

How are you coping at home?

I eat a lot and started to gain a few weight. Hahaha. I also start learning how to do programming and how to edit videos from YouTube.

What’s the impact on the tourism in Japan?

I don’t shoot anything now. Last time I did a photoshoot was April 3rd, so almost the entire month of April I just shoot at home. I recently started an education business though! Something like an e-learning portal and I joined them and help them in creating textbook for you to learn how to speak Japanese. As for toursits, I don't see any! There’s actually a survey online saying that the number of people walking over on the usually very busy Shibuya Crossing has dropped 98%! One bad thing about COVID-19 is that it happens during the hanami (sakura watching) season. How was hanami this year?

People actually still went out on early March to watch, but there's not as much crowd as usual. The Sakura in Tokyo has gone since last week, so we missed that this year. Actually the time of the blooming depends on the type of Sakura; some of them started blooming since the end of February while others are later nearing March and April. Each trees bloom for only 2 weeks. The different variety of trees we have in Tokyo makes it possible for you to enjoy Sakura for around 2.5 months. You've been a photographer with SweetEscape for the longest time. Any memorable sessions from your time with us?

I had around 300 sessions with SweetEscape so there’s a lot of memorable ones! But if I have to choose, probably the first session I did. I shot them at Shinjuku Gyoen garden and they were a married couple with a little boy and they’re just super fun! I’m supposed to be the one who entertain the clients during the session but they’re the ones who actually made me laugh throughout the photo shoot. We ended up getting coffee together after the session and chat for quite some time. Their photos turned out really well because we communicate a lot; communication is key to make a good photo session! by Mizuki for SweetEscape in Yokohama What about a weird or funny session?

Maybe more surprising instead of weird or funny, I think... It was not surprising as in a proposal session, but a family photo shoot. So I had these older couple, the mom and dad, for a photo shoot in Odaiba. Their kids were not supposed to be in Tokyo, but because it was their mom's birthday, suddenly everyone showed up and surprised her, 2 boys and 1 girl. It was super cute and memorable.

What is your favourite type of moment to shoot?

Proposals of course! So much joy and happiness, makes me happy too. So, where do you think is the best spot to do a proposal in Tokyo?

It depends whether you want to be surrounded by people or a surprise proposal. If you're okay to be witnessed by many peoplke, Shibuya Crossing is perfect and dramatic, but you have to be patient because there are lots of people, but the shot is going to be awesome. For a surprise proposal, I think it's best to be somewhere more private, so I'd recommend the beautiful Shinjuku Gyoen. It's a massive park, around 60 hectare, so we can always find an empty spot. What is the most common thing your clients ask when they do a photo shoot?

Mostly where to eat good food because Japanese food is one of the main reasons people visit Japan, I think. I usually see how big the group is, how many people, because if the restaurant is really good you won't be able to go with your entire big group altogether because most restaurants in Tokyo is pretty small. There's one place that you can go no matter how big or small your group is, it's called Tonkotsu Maizen, that's one of my personal favourite. Our live audience asked this: How to do a Pre-Wedding shoot that looks natural and not forced?

I think for pre-wedding the couples should be able to be natural because you've been together for quite some time. The problem is how can you not be shy to show your intimacy in front of a stranger, the photographer. I understand this, so I just try to be as nice as possible since the beginning, and chat with them even before the session through the SweetEscape app. I want to create a relationship, getting to know each of them better. During the session I also chat with them, asking their preferences and so on... It usually makes them feel more comfortable and less shy, which will make the photos turn out more natural as well. Is there any good non-nature photo spot in Tokyo?

Of course! Shibuya is a good spot, but I personally like the west side of Shinjuku with all the skyscrapers. It's pretty calm compared to the East side of Shinjuku around the Kabukicho area, where it is pretty busy 24 hours a day. The West side is more of a CBD and government area so there's not a lot of people walking around, and the buildings are also super beautiful! You can also buy cameras there... I buy mine there, too. Hahaha. 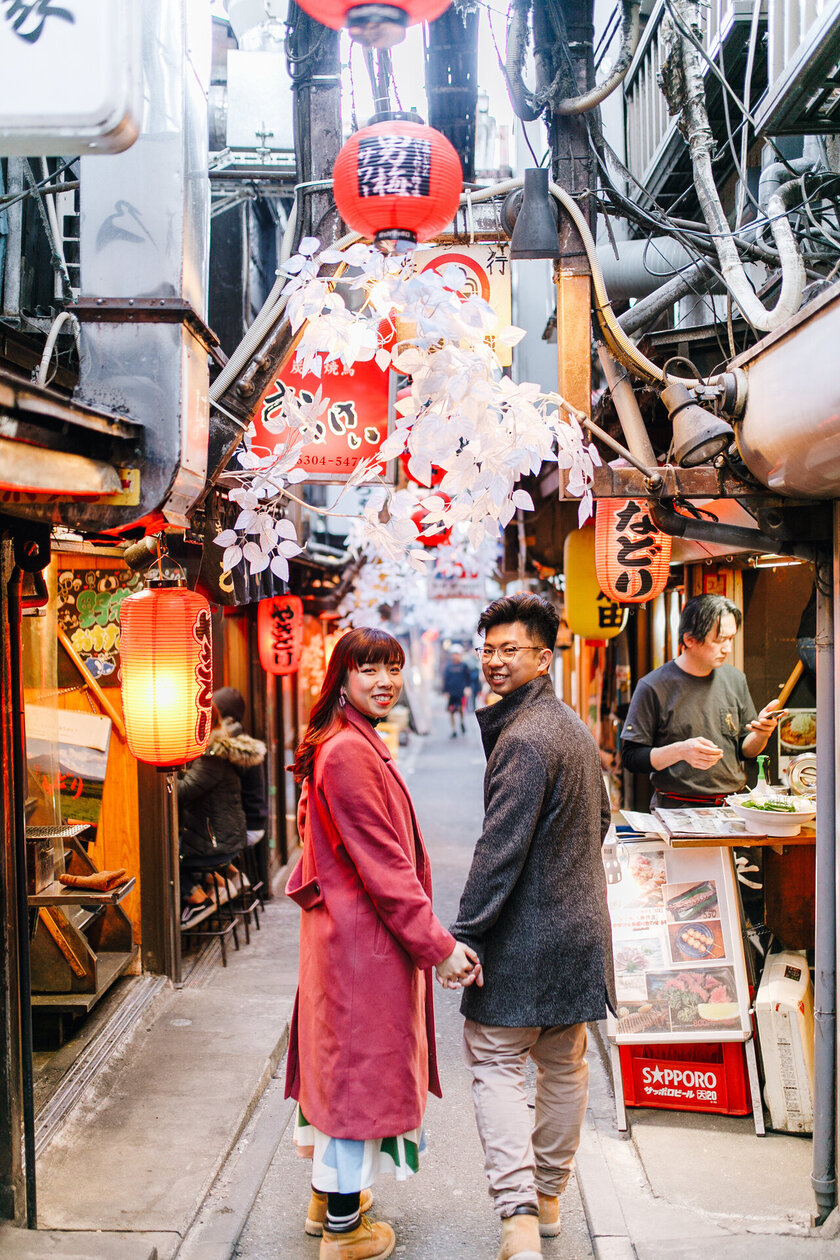 What about other cities in Japan to see sakura other than Tokyo?

Osaka and Kyoto, definitely. But the Sakura actually blooms starting from the South to the North of Japan. So if you fly here around end of February then you can go to Okinawa to see the Sakura, but if you’re flying here at end of April then you can go further North. Hokkaido's sakura will be around May. If you visit Tokyo, Kyoto, Osaka during the Sakura season, it’s gonna be super crowded and expensive. Hotel rates will be high. So if you want, you can go straight to Hokkaido for a lesser crowd. It’ll still be pretty busy but better than Tokyo, Kyoto, Osaka. No need to go super North until Niseko because they will still have snow, not falling snow, but the snow won’t melt yet and there will still be snow on the ground. April onwards will start to melt and the snow will be gone around May. 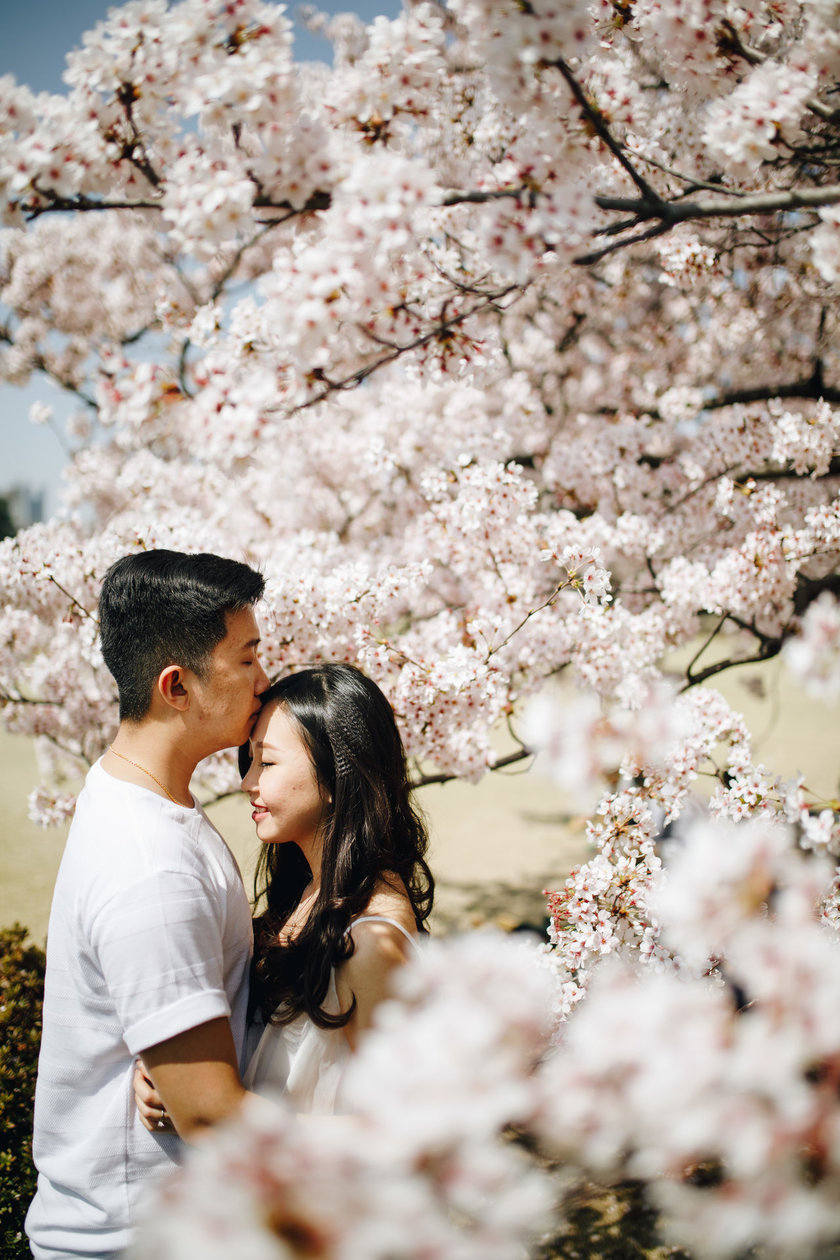 We definitely miss seeing the beautiful sakura in Japan this time around, but we are hopeful that we can visit Japan next year for a beautiful hanami season, when all of this is over. Until then, stay safe, stay at home, and plan your next trip to Japan #CapturedPerfectly with SweetEscape! Netflix and Travel: Stunning Locations from The Hit K-Drama 'Crash Landing on You' Conversations with SweetEscape Photographer during COVID-19 - Episode 2: Dennis and Dewi from Amsterdam, The Netherlands
Share this article