Pre-wedding photoshoots, or 'pre-nup' as it is better known in the Philippines, have become an inseparable part of a wedding journey, usually taking place three to six months prior to the wedding day. From a simple indoor photoshoot in a studio to a pre-wedding photo shoot trip to a romantic location far away in Europe or the Americas, every couple wanted to create the best pre-wedding photos, to be shown at the wedding day celebration. Many couples have interesting ideas for their pre-wedding shoots, such as re-creating scenes from famous movies or going to places that holds a special memory for their love journey. 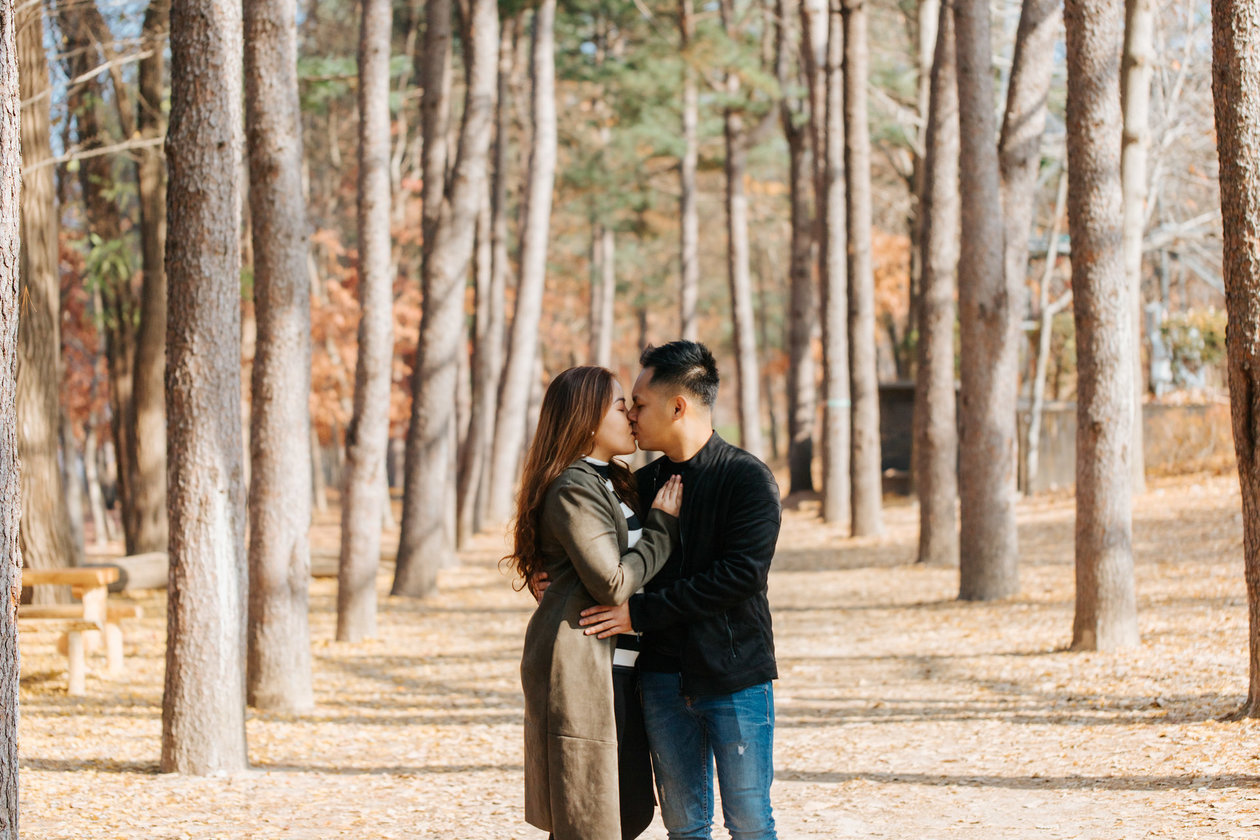 One of the most interesting pre-wedding shoots we've ever heard was done by one of our Escapist couples: Sheena Buraga and Daniel Brian Joven. Starting from Daniel's proposal to Sheena under the white-pink petals of a spring cherry blossom in Tokyo, they decided to capture their love journey in a four-seasons themed pre-nup shoots heading to their November 2019 wedding. We had a chance to speak with them as they prepare for the fourth and final part of their 'Four Seasons of Love' pre-nup shoots.

What an interesting pre-nup idea! Can you tell us how the idea came to you? So at first we didn't plan it to be a pre-nup photoshoot... It wasn't even a proposal shoot for all that I know off! We were just trying to find a photographer for our spring holiday travel to Japan back in March 2018. I saw SweetEscape's ad in instagram, and I just decided to try to book a session. As we did our sakura watching in Tokyo, suddenly Daniel fell on one knee and proposed to me! It became such a romantic occasion under the sakura, and SweetEscape captured it beautifully!

What made you decide to capture more pre-nup photos with us? Between May and June 2018 after the proposal, we started planning for our wedding. At first we thought that the photos in Tokyo would be our proposal / engagement photos, and we wanted to capture another pre-nup photoshoot, not with SweetEscape. But when seeing our proposal photos shot by SweetEscape, everybody said that our pre-nup shoots will look less beautiful compared to the super-beautiful photos of our proposal taken by SweetEscape! Considering this, and since we were travelling to Nami Island, South Korea in the autumn, we decided to create this 'Four Seasons of Love' pre-nup concept with SweetEscape!

How was your Autumn-Themed shoot in Nami Island? It was Daniel's 30th birthday and our first time to experience the autumn season. However, at first we were a little bit disappointed when we reached Nami Island. Because the day before it was raining hard, so all the leaves have fallen down from the trees. Also, the place was crowded with people that day, so we were already kind of apprehensive. However, our photographer just told us to "enjoy the shoot, and everything will be okay". 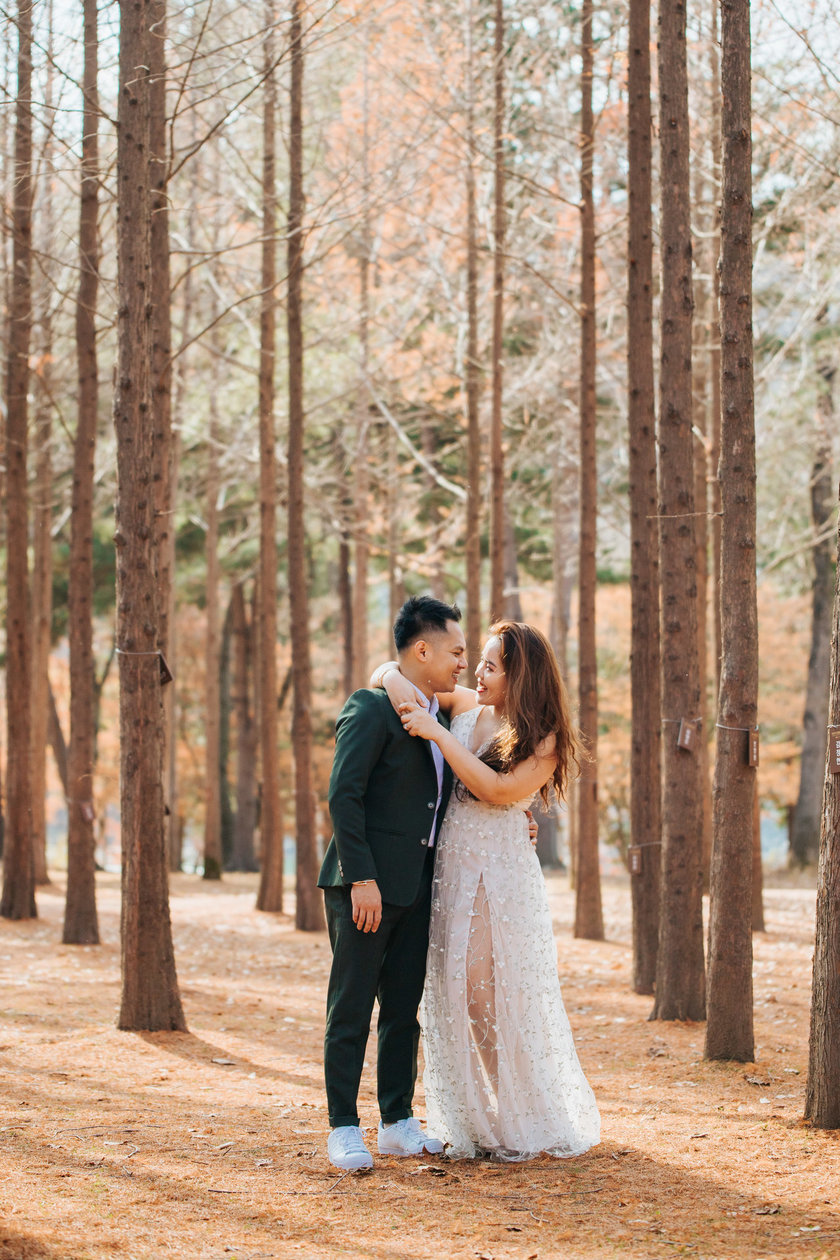 Turns out, the photographer was right. Even though the leaves were all fallen and the place was crowded, the photos turned out to be just as great, if not greater than our proposal shoot!

After Autumn comes Winter. What's the story of your winter shoot? Actually this was my favourite session! We shot our winter photo shoot in Niseko, Japan, in February 2019. Everything was so white and beautiful, the photographer was so good, and of course the photos turned out great. After seeing the results, our friends keep asking us who did we hire for our photo shoot, how come it was so good, and all. I am super happy.

Where do you plan to take your Summer-themed photo shoot to complete your 'Four Seasons of Love' pre-nup?

We plan to do it either in Boracay or Siargao, and we can't wait to do the session once again with SweetEscape! Wherever you plan to do your pre-nup photo shoots, let SweetEscape capture the moment for you! We capture any occasion, any time, anywhere. We connect you to a growing network of photographers in 500+ cities around the world, and your photos will be ready for download in 48 hours after the session via the SweetEscape app and our website. Book your session today and let's #MakeLifeMemorable! Alfred Surprised Tina Yong When He Bent The Knee in Sydney