Yellow cabs, cool cafés and restaurants, Times Square... New York City is the city that never sleeps and always leaves you in awe everywhere you look. There's always something to discover in the buzzing cosmopolitan. But guess what? There are 5 other places you can also visit from New York City - in under 3 hours! Check out our recommendations below.

Although more known as the political capital of the world, Washington DC is also a major tourist attraction, thanks in no small part to its many landmarks such as the Lincoln Memorial and the Washington Monument. There are plenty of historic buildings you will encounter throughout the city, as well as museums, including the National Museum of Natural History. The perfect vacation spot from New York City, it's time to get your arts and culture fix in Washington DC! Take a short flight from New York City to Philadelphia, where you can snag a photo in front the famous Liberty Bell overlooking Independence Hall! Afterwards, take in the epic view of City Hall from South Broad Street and capture your memories in front of the LOVE sign that serves as the grand entrance to the Benjamin Franklin Parkway. End your journey with a wam Philly cheesesteak where fans of Geno’s Steaks and Pat’s King of Steaks pledge their loyalty everyday. There's nothing quite like the streets of Philadelphia! This NYC getaway is renowned for being home to two of the most prestigious Ivy league universities in the world, Harvard and the Massachusetts Institute of Technology (MIT). Warrant a trip across the Charles River to Cambridge to get a full view of the two institutions! In the heart of downtown Boston, and along the Freedom Trail, shop the day away at Faneuil Hall Marketplace. With more than 100 shops and restaurants, we are certain you will not go home empty-handed!

by Christine for SweetEscape in Boston Not unlike New York City, Chicago is all about the nightlife. There are plenty of nightclubs and dance clubs you can spend your nights away in Chicago, such as Smart Bar and The Mid. Chicago also has many ethnic restaurant districts, ranging from Mexican American, Puetro Rican, Greektown, Chinatown, Little Italy to Little Vietnam. Feel like splurging a little bit? Head over to the Magnificent Mile and State Street, where upscale shopping establishments reside. Simply put, Chicago is the mini getaway from New York City you never knew you needed!

by Michelle S for SweetEscape in Chicago You can even cross the Canadian border for your weekend getaway from New York City! One of the best cosmopolitans in the world, Toronto offers a multicultural experience unlike other major cities, with its many museums and galleries and national historic sites. The Royal Ontario Museum embodies this multicultural spirit, as does the Art Gallery of Ontario. For a more unique experience, head over to the Gardiner Museum of ceramic art, the only museum in Canada entirely devoted to ceramics.

by Oleg for SweetEscape in Toronto 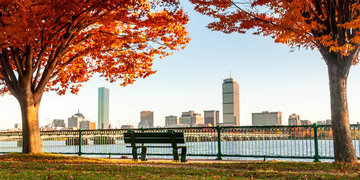 In Australia, Sometimes The Snow Comes Down in June
Share this article